Building a guitar from a kit 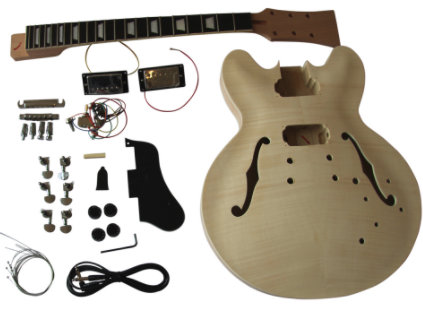 Having converted a couple of guitars to guizoukis, I felt it was time to attempt to build a guitar from a kit. After all, I like guitars, I passed 'O' Level woodwork, I've got some decent tools and a functioning man cave. How hard could it be?

Like most of the other kits available, they are made in China and contain everything you need to build the guitar; with the exception of glue to attach the neck and a finish for the body and neck.

I started by looking online at the options available for finishing the guitar body. There are plenty of videos on YouTube showing how use stains, paint, lacquers and oils. Some require expensive materials and a clean, dry space to work in - but not indoors because of the fumes.

After much consideration, I decided to use a wiping oil technique using a 50/50 mixture of clear polyurethane varnish and white spirit. As well as being a cost-effective solution, I hoped to bring out the beauty of the flamed maple top and mahogany back and sides with a natural finish.

The YouTube videos, made by Chris Monk of Highline Guitars, take you through the whole process in detail. I advise watching them through a couple of times before starting and then referring to them as you go along. 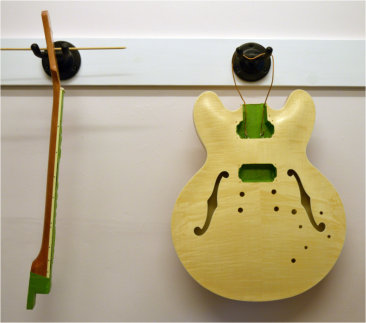 You really do need a space where you can work on the guitar without it being disturbed and, although the fumes from the spirit/varnish mix weren't too bad, it's not something you would want in your living room.

Luckily, I have a hobby room for my own use with a long bench/cupboard and space to hang guitars on a wall. I covered the cupboard top with thick cardboard and an old bath towel to protect the guitar body while I worked.

I worked on the body and neck separately, masking the fretboard and pickup channels with decorator's masking tape. However, if I were to do this again, I would probably glue the neck on at the beginning so that I could sand down the joint before applying the finish to get a cleaner edge. 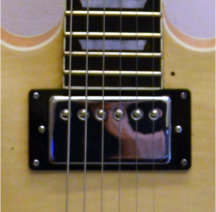 The neck fits snugly into the body but there is some movement backwards and forwards so I used the neck pickup holder as a guide - it's the black plastic plate shown in this photo. I screwed the pickup holder in place and slid the neck up to meet it.

Most of the video tutorials I looked at used Titebond wood glue, so this is what I used (but I suspect that any good wood glue would have been suitable).

I left the clamps on for two days to ensure the glue had fully set.

The scariest part of this process is hammering in the tailpiece and bridge posts. 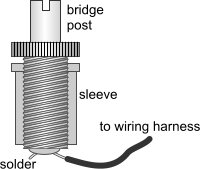 IMPORTANT - It was only when I came to fit the electrics that I found out that the bridge needs to be grounded - i.e. a wire from a bridge post must be connected to the wiring harness. There's no pre-drilled hole to allow for this so I drilled a hole from the bridge pickup cavity to the lower bridge post hole.

I laid the guitar flat on an extra thick folded towel and masked the front with sheets of polystyrene packaging and carefully hammered the posts into place. I then fitted the tailpiece, bridge, machine-heads and pickups, ensuring that I had first threaded the wires from the pickups and bridge through and out of the bottom F-hole.

I attached the strings from the kit so I could test the electrics.

The pickups each come with two wires attached. These are threaded through holes in the body to the wiring harness which I put together outside the bottom F-hole.

The wiring harness is partially completed, i.e. four potentiometers (volume and tone controls) are connected together with wires attached to connect to the three-way switch, the jack-plug connector and the bridge post.

The kit comes with a rudimentary circuit diagram which didn't help much and, after quite a while searching online, I found a clear diagram produced by IronGear Pickup Engineering.

I followed the instructions on this video to assemble the wiring harness outside the guitar and, after testing the electrics, to fit the components to the body of the guitar through the lower F-hole.

So here is the completed guitar. I have fitted the strap holders, adjusted the height of the grooves on the nut to lower the action, used the screw adjusters on the bridge to set the correct intonation for each string and adjusted the height of the bridge and pickups. The decal on the headstock was drawn on a computer and printed on an inkjet printer onto clear waterslide decal paper. I replace the poor supplied strings with D'Addario EXL110s. I've also replaced the plastic truss-rod cover with one I made from a strip of mahogany.

I've always wanted to buy a DIY kit, particularly a Telecaster kit but I have zero experience in putting together guitars. Are these kits easy to assemble for newbies like myself?

Your kit came out beautifully! One change I made on mine was to move the output jack to the side of the guitar. To cover the hole left in the front, I purchased some decorative wood online and glued over the hole and put another piece on the other side to balance it out. My guitar has the fake bigsby, so I grounded it rather than the bridge. I had originally grounded the bridge but had too much hum and noise and ended up rewiring the entire project with quality shielded wire. At this point, it was easier to ground the tremola rather than rewire the bridge.

So, the big question: how does it play. You said there was a bit of movement in the neck fitting: does this have any noticeable effect on the instrument?

It plays very nicely with a low action. There's enough adjustment in the bridge to get the tuning just right. Some of the frets were a little rough so I had to have them levelled.

A good account. The sort of kit, make and model I have been looking at. I am inspired. Rock on! :)